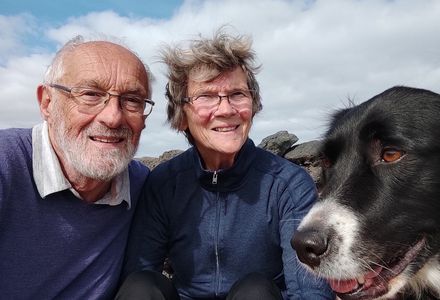 Helen took part in the ENGAGE study – an international study on a new investigational medication, Aducanumab

Taking part in a clinical trial was a family affair for husband and wife Phil and Helen Theaker.

Helen took part in the ENGAGE study – an international study to determine whether a new investigational medication, Aducanumab, can slow the progression of early Alzheimer’s disease.

Phil, who is Helen’s carer, said working closely with the clinical team had given them the opportunity to ask questions and get a much better perspective of how to manage the illness.

Aducanumab is designed to target amyloid, one of the hallmark proteins that builds up in the brains of people with Alzheimer’s at an early stage in the disease process. The drug is given through an infusion into the patient's arm.

Initially, Helen went every four weeks to the Clinical Research Centre in Ninewells Hospital, Dundee where she underwent an infusion, along with physical examinations, psychological tests, MRI scans and other tests to monitor health. Helen was part of the trial for 18 months, and they both found the experience overwhelmingly positive.

“It gave me a great opportunity to discuss her condition with the team and actually we were able to spend at least an hour with the nurse during the infusion, and the whole process took about two and a half hours.

“It was, in the end, a very sociable experience and everything about the whole procedure was very positive for us.

“Taking part was beneficial to us as we were able to ask lots of questions and from a carer’s perspective, it was therapeutic to be able to talk about Helen with people who really understood Alzheimer’s, and I think on the whole Helen enjoyed being part of it.

“Everything was very thorough –  we were given lots of material to read alongside opportunities to follow this up in person so we both felt very well informed.

“We’ve no regrets about taking part at all and would encourage others to take part in future trials.”

Aducanumab is the first new treatment for Alzheimer’s Disease in nearly twenty years. It was approved by the FDA in the United States in June 2021 based on the findings of the ENGAGE study. UK and European regulators are currently completing their own rigorous assessment of the data and are expected to announce their response in the autumn. Patients across Scotland and England were among thousands worldwide who took part in trials of the drug.

Go back to News